One of the goals set by the United Nations Decade of Ocean Science for Sustainable Development[1]  (Ocean Decade) is a transparent and accessible ocean. In Portuguese, the word transparent associated with the word ocean makes us think of crystalline waters, through which the light penetrates, and the beauty of the sea can be seen clearly. Deep down, the idea seems to be exactly that: look and understand the ocean deeply.

However, there is an abysmal pit in the path of these light rays: the absence of scientific data related to the ocean. If the proposal is a transparent ocean, with open access to data, information, and technologies[2], the production of data is necessary to understand the scenario and connections of the various themes related to the sea, connecting the humanities, exact and biological sciences.

Furthermore, scientific production related to the seas is unequal between States, with, for example, Brazil being in a median position if compared to other countries, such as the United States and China. It should be noted that the largest Brazilian frontier in extension is the ocean, in our case called Blue Amazon. For a better understanding of these data, observe the map below[3][4]: 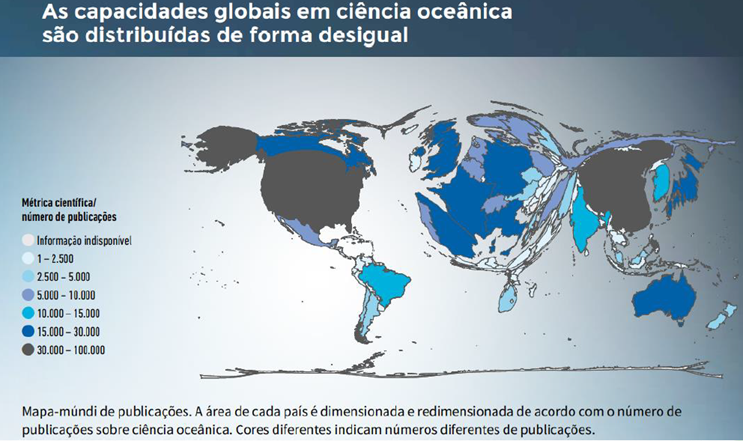 The issue of data production becomes even more nebulous when the lack of connection between them is noticed. There are, for example, no comprehensive and global databases to gather ocean data, nor do they explain the methodology used. Disclosure ends up being, for the most part, decentralized, as it is usually retained in public agencies in the States – also fragmented – and partly in projects linked to universities. There are not many initiatives to aggregate this data, leaving it concentrated in a few areas and themes, such as transport (eg Trans-Regional Maritime Network System – T-RMN), or efforts undertaken by international organizations.

One attempt to build a unified database is the 2030 Agenda for Sustainable Development[5], which gathers in its platform data related to the goals that must be pursued by the countries that have committed to them. However, the Agenda itself does not specify a methodology to produce these data, leaving each State in charge. In turn, they produce the data in the way they understand best and make it available on the platform. When the country does not produce this data, the Agenda’s organization establishes an estimated number[6].

Therefore, there are two problems in this model: one for the construction of the database, which ends up impaired, since estimated data are not real data; and another for the State, which, upon having its data “estimated”, is at the mercy of the institution to establish super or sub-estimated data, which may harm it in comparison to other members and, consequently, may cause political barriers.

A unified system for data production requires scientific and technological cooperation, as economic, political, and technological conditions vary between states. On the other hand, this is one of the ways to produce data in a unified way, making a transparent ocean possible, known and valued by everyone, as the Decade of the Ocean aims.

Going deeper into this issue, the “transparent ocean” goal can be considered the pillar that supports all the other goals contained in this Agenda. If there is no data available on themes related to the ocean, it is not possible to achieve the dream of “one planet, one ocean”.

To conclude, there is no way to think about the Decade of the Ocean, without talking about methodology, production, availability, and integration of data. Without this foundation, the intended structure cannot be built, and the goals of this Agenda will not be able to be achieved solidly. If this is not built, in ten years there will be only one sandcastle, without solid pillars, which could collapse in the first strongest wave.

*The title of this column is na allusion to Sir. Isaac Newton’s quote: “What we know is a drop, what whe don’t know is an ocean”.

**Source of the cover image: Freepik. Available in: https://br.freepik.com/fotos/agua

[4] This map is named “Global capabilities in ocean science are unevenly distributed”. It is a global map about scientific publication.

[5] For a better understanding of this database, check: https://unstats.un.org/sdgs/indicators/database/

[6] The database used to measure the indicators of the SDGs, by the UN, works with the following types of data: (fn) Footnotes; (C) Country data; (CA) Country adjusted data; (E) Estimated data; (G) Global monitoring data; (M) Modeled data; (N) Non-relevant; e (NA) Data nature not available. The Estimated data is the one that shall be taken into attention by the States.