The container ship MV X-Press Pearl, loaded with 25 tons of nitric acid, a large quantity of lubricants and 81 containers of cargo considered hazardous, was traveling from Qatar to India and was bound for Singapore, the vessel’s flag state. However, on May 20th, as the crew was preparing to enter the Colombo’s Port in Sri Lanka, a fire broke out on the ship. The fire lasted 13 days and weakened the structure of the vessel, which began to sink on June 2nd.

Possibly the cause of the disaster may have been a nitric acid leak that began on May 11th and was reported by the crew of the MV X-Press Pearl to Qatar and India, which did not give the container ship permission to unload the chemicals. Fortunately, the 25 crewmembers on board were rescued by Sri Lankan authorities, but the environmental and economic consequences can be catastrophic for the island.

The incident, already regarded as the worst environmental disaster in the country’s history, caused tons of microplastics to leach out of the containers and cover about 80 kilometers of the west coast of the island. Sri Lankan soldiers were allocated to clean up the beaches, but a new wave of Covid-19 in the country has forced many of them to stay home to comply with public health restrictions, making it difficult to clean up the coast. 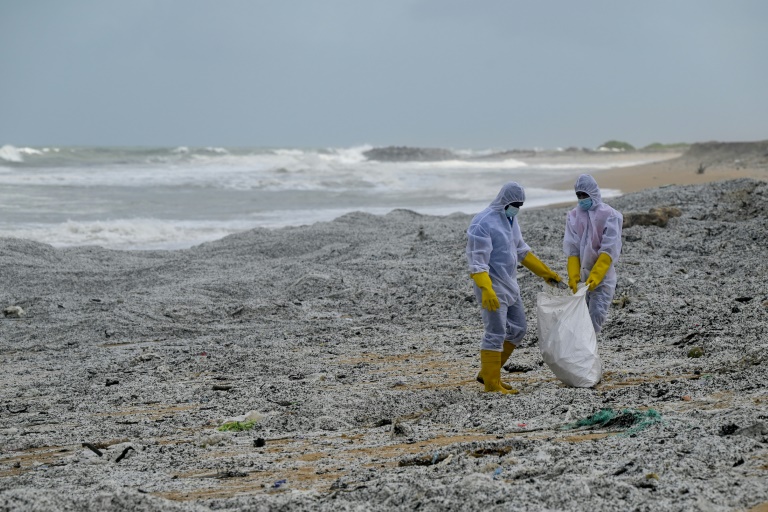 Millions of microplastics, oil and chemicals that leaked from the ship could be fatal for nature and life in the region. These substances are highly toxic to common animals in the area, such as fishes, turtles and seabirds. The Marine Environment Protection Authority (MEPA) says that the toxic products from the vessel that contaminated the seawater are likely to cause serious problems for coral reefs, lagoons, and mangroves, damages that can take decades to repair. In addition, for safety reasons, the island’s government has suspended fishing within a 50-mile radius of the wreck, a situation that affects about 5.600 fishing boats and reaches fishing, one of the main activities in the region.

As an aggravating factor, it is feared that some of the 350 tons of fuel in the container ship’s tank will leak and intensify the ecological damage. To avoid this possible oil spill from happening, experts from two major organizations that combat pollution and fuel spills caused by vessels, the International Tanker Owners Pollution Federation Limited (ITOPF) and the Oil Spill Response (OSR), traveled to Sri Lanka to assist in the operation that tries to prevent the leak.

Even if there is a possibility that the fuel may have burned in the fire, the captain of the Colombo’s Port, Nirmal Silva, guarantees that the team is preparing for the worst case scenario. As prevention measures, a specialized vessel is already on the local to contain a potential fuel spill and floating barriers and oil dispersants have been installed to prevent debris from reaching the coast.

In response to the disaster, the Sri Lankan government has demanded $17 million from the owners of the container ship to pay for the expenses of cleaning up the coast and has launched an investigation to find out the cause of the fire. The Ports Minister says the country hopes to get compensation under domestic and international law. The voyage data recorder, equivalent to a black box, has been recovered, enabling investigators to find out if proper protocols were followed before and after the fire.

The Center for Environmental Justice, which operates in Sri Lanka, said it will file a public interest lawsuit against the company that owns the MV X-Press Pearl. So far, three crew members have been interrogated and their passports retained.