The partnership was announced on the night of September 15, Wednesday, when Joe Biden, President of the United States, revealed in a videoconference held with the Prime Ministers of the United Kingdom and Australia, Boris Johnson and Scott Morrison, the new security alliance signed with Australia and the United Kingdom, called “AUKUS” (a combination of the initials of the countries involved). The strategic agreement between the countries includes the supply of technology for the construction of nuclear-powered submarines for the Australians and meant the breach of the contract signed in 2016 between Australia and France for the supply of twelve conventional submarines. The situation was seen by Jean-Yves Le Drian, Minister of Europe and Foreign Affairs of France, as ”a blow in the back” from the country and was called by the press “submarine crisis”, in French, “crisis des sous-marins”. [1] 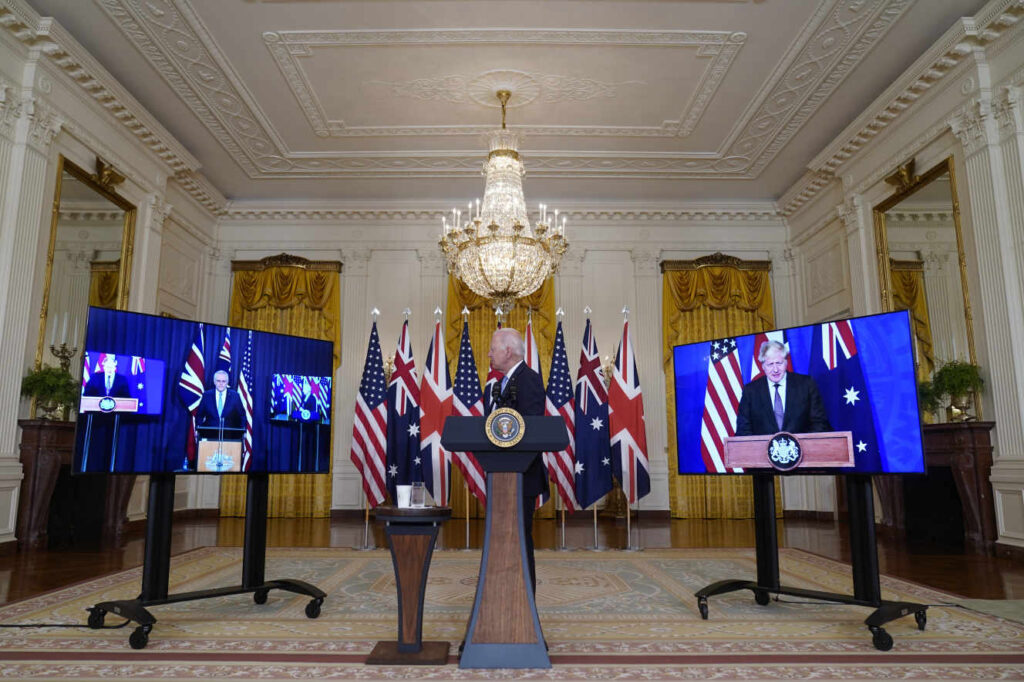 The contract signed on December 20, 2016 between Australia and France provided for the purchase of twelve conventional submarines from the Naval Group, formerly the Direction des Constructions Navales (DCNS), a French company specializing in naval defense with capital investment from the French State. Signed by Jean-Yves Le Drian, then French Minister of Defense, and Malcom Turnbull, former Prime Minister of Australia, the agreement was considered the world’s largest of its kind by former Australian Defense Industry Minister Christopher Pyne, as it involved the sum of 50 billion Australian dollars (approximately 34.5 billion euros) at the time – the updated value would be around 90 billion Australian dollars – and the approximate duration of fifty years of commitment in favor of the construction of the submarines. [2] In addition to the hefty value, the contract represented Australia’s expansion into the naval apparatus and military interests in the Indo-Pacific region.

The exact terms of the contract established between Australia and the French Naval Group are not public, but the implications of its non-compliance by Australia will certainly result in damages that were not seen by the country as an obstacle to the rejection of the US proposal. The breach of the “contract of the century”, as it became known, came as a surprise to French and European Union authorities, who claim they were not previously informed about the Australian withdrawal, which represents a serious diplomatic crisis and provokes the need for redirection of France and the European Union in the Indo-Pacific region. [3]

This is because the new alliance established with the United States and the United Kingdom involves the partnership for the construction of nuclear-powered submarines for Australia, which is not to be confused with nuclear weapons, but highlights the strategic issue inherent in the use of nuclear technology in Indo-Pacific region as a consequence of China’s expansion. The completion of AUKUS also represents the displacement of the US issue in Afghanistan to the problem of Chinese containment, an attempt by the Biden government to redirect geostrategic interests after the withdrawal of the United States from Afghanistan, seen by public opinion as a failure. [4] [5]

More than a diplomatic crisis, a crisis of confidence that represents a wake-up call for the European Union

The first response by the French authorities to the breach of the submarine contract was abrupt and imposing. “It is a decision contrary to the letter and spirit of the cooperation that prevailed between France and Australia, based both on a relationship of political trust and on the development of a very high-level defense industrial and technological base in Australia.” informs the official announcement of Jean-Yves Le Drian, French Minister of Europe and Foreign Affairs, and Florence Parly, French Minister of Armed Forces, on 16 September.  [6]  Le Drian even compared President Biden’s actions with former US President Donald Trump’s actions in a statement to France Info radio, demonstrating French indignation at the United States’ role in the submarine crisis. [7]

On Friday, September 17, France summoned the French ambassadors to the United States and Australia for consultations, highlighting the diplomatic imbalance brought about by the realization of the new alliance. However, a telephone call made last Wednesday, September 22, between US President Joe Biden and French President Emmanuel Macron eased the impacts of the diplomatic controversy and indicates that countries are moving towards an attempt to restore mutual trust. [8]

More than a diplomatic crisis between Australia and France, as well as between the United States and France, which are long-time partners, AUKUS can be seen as a warning to the European Union, which declared symbolic support for France through statements and interviews from some of its representatives on Monday, September 20, in New York, where they were meeting for the General Assembly of the United Nations. Josep Borrell, High Representative of the European Union for Foreign Affairs and Security Policy, expressed solidarity with France, while Ursula von der Leyen, President of the European Commission, declared the episode inadmissible, and Charles Michel, President of the Council of the European Union, came out more incisively, pointing out that the submarine crisis revealed the lack of loyalty of the United States towards France. [9] [10]

The impacts of the breach of contract highlight the need for the European Union to be more proactive and efficient in relation to issues of strategic autonomy. This is a diplomatic crisis in relation to the trust and international cooperation established between France and Australia, as well as the historic and long partnership between the United States and France, but it projects a geopolitical crisis in the Indo-Pacific region for the France and the European Union, which need to rethink ways of inserting themselves in the region’s new strategic dynamics and participating in the competition to control the Chinese advance.

Seen as a threat to China, the alliance signed between the United States, the United Kingdom and Australia calls into question the issue of a possible arms race in the Indo-Pacific region, since even if it does not involve the supply of nuclear weapons, mainly in view of the Treaty on the Non-Proliferation of Nuclear Weapons (NPT), from 1970, it still indicates a new and strategic geographic point of possible action for the North Americans and British in the region. In case of potential future conflict, the alliance represents, for the US and the UK, an overseas possibility of military action.

China sees the new alliance regarding the supply of nuclear technology for the construction of submarines to Australia as irresponsible and a threat to peace and security in the Indo-Pacific region, which could provoke, according to Zhao Lijian, spokesman for the Ministry of China’s Foreign Affairs, the intensification of the nuclear arms race in the region.  [11]

The concern is not limited to the Chinese authorities, since, internationally, the use of nuclear energy is directly coordinated by the International Atomic Energy Agency (IAEA), which seeks its peaceful use and, in case of potential future conflict, it will have to analyze whether the technology intended for the construction of submarines in fact does not operate against the provisions of the NPT, that is, whether the destination of these submarines will be limited to the protection of Australian jurisdictional waters and will not exceed the limits of use of force based on the international principles of peace, security and the peaceful settlement of disputes.

The rare nature of the sharing of nuclear technology by the United States highlights the redirection of strategies to contain Chinese expansion and, at the same time, reaffirms China as an expanding military and economic power in the ongoing global reorganization, worthy of confrontation by the other world powers. [12] China’s position in the Indo-Pacific region is even more relevant since the inception of the “New Silk Road” Project in 2013, a Chinese enterprise known as the “One Belt, One Road” or Belt and Road Initiative that has as objective to connect China to the rest of Asia, Europe, Africa and the Middle East through investment in infrastructure and transport and represents the evident Chinese expansion of commercial land and sea routes. [13] 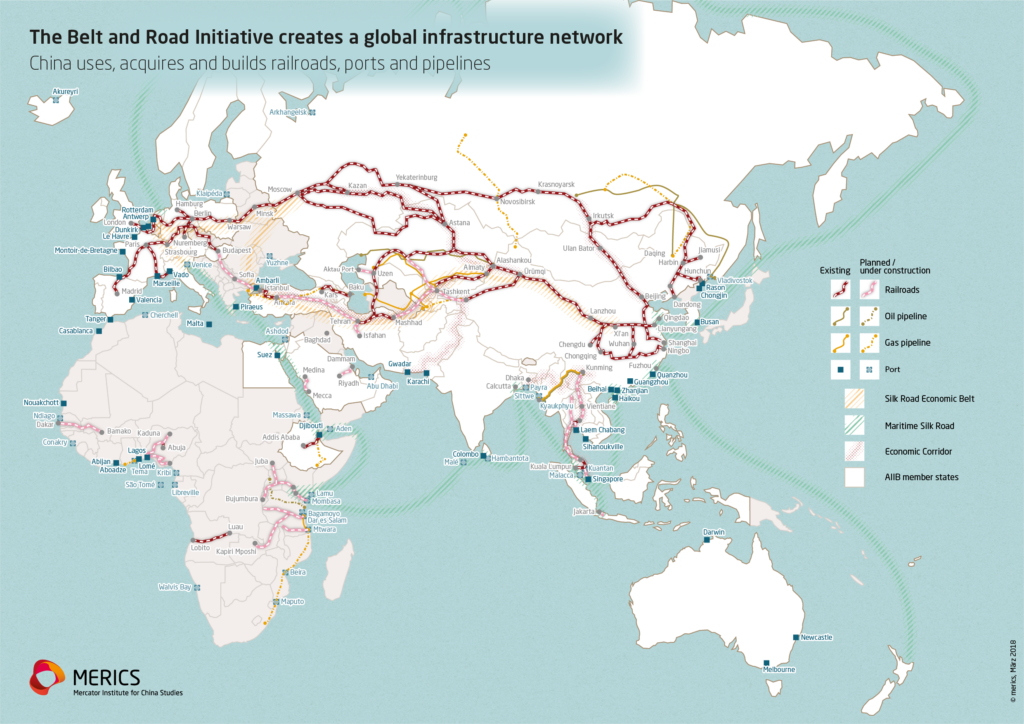 Due to Chinese advances in the area between the Indian Ocean and the Pacific Ocean, the region came to be called the Indo-Pacific region and became especially relevant to the commercial, maritime and military interests of the world powers, which includes the United States and reveals Australia as a geographically indispensable country for the construction of strategies to contain Chinese maritime expansion. Not by chance, the contract established between France and Australia, now deliberately discarded, represented an indispensable maneuver for the French economy and geopolitics and reflected in the balance of world powers that involves the actions of the European Union.

The impacts of the AUKUS celebration could jeopardize maritime safety and trigger future conflicts in the already very disputed Indo-Pacific region. As Paris, Washington, London and Canberra try to redress the diplomatic balance, the game of power in the Indo-Pacific region is being redesigned in front of China’s open eyes. And the European Union is watching like binoculars in front of an Orwell telescreen as its strategic power is shaken.

[5] CNN. America’s Afghan war is over but the battle for Biden’s legacy is only just beginning. Available at: https://edition.cnn.com/2021/08/31/politics/americas-afghan-war-is-over-joe-biden-legacy/index.html.

[13] Merics. Mapping the Belt and Road initiative: this is where we stand.  Available at: https://merics.org/en/tracker/mapping-belt-and-road-initiative-where-we-stand.