One of the most controversial, complex, and challenging geopolitical issues currently facing the world is the ongoing dispute in the South China Sea.[1] The crux of the dispute centers on sovereignty over a number of maritime features in the area and the potential entitlement to the maritime zones that those features generate.[2] As the region has enormous economic potential, due to the large estimated quantity of unexplored oil and natural gas, and to its importance as a maritime routes hub[3], it becomes even more crucial for the interested states to exercise sovereignty over the most amount of islands possible, and, consequently, to own the larger possible maritime entitlements in the area.

In 2009, China surprised regional observers by submitting to the United Nations its so-called nine-dash-line map, which claimed up to 90 percent of the South China Sea.[4] 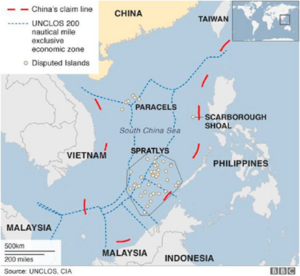 China’s sovereignty claims are based on a byzantine combination of historical discovery and usage and cession by colonial powers, which the claimants have attempted to strengthen through effective occupation.[5] To execute this occupation, China has since 2013 launched an island-building program, in which it modifies several features, including small low-tide elevations and reefs, into artificial islands, including militarized ones.[6]

In 2016, after being requested to appreciate the situation in light of the applicable law, the Permanent Court of Arbitration ruled in favor of the Philippines against China’s claims to the disputed territories in the South China Sea.[7] The Court was requested, inter alia, to determine whether some features, including China’s artificial islands, were low-tide elevations within Article 13 of UNCLOS, or islands within Article 121(1). On the one hand, under article 121(1), islands have a continental shelf and an EEZ of their own, while, on the other hand, low-tide elevations do not. Accordingly, the Tribunal concluded that:

In other words, the Court held that whatever modification is applied to a maritime feature, this feature is to be evaluated in accordance with its natural form. In practice, that means that the modified features would “be ascertained on the basis of its earlier, natural condition, prior to the onset of significant human modification.”[9] Moreover,  the Court would “reach its decision on the basis of the best available evidence of the previous status of what are now heavily modified coral reefs.”[10]

For instance, when analyzing the Fiery Cross Reef, the Tribunal acknowledged that the installations on the feature included “a three-kilometer runway, a 630,000-square-metre harbor, multiple cement plants, support buildings, temporary loading piers, communication facilities, defense equipment, two lighthouses, a greenhouse, two helipads and a multi-level administrative facility adjacent to the runway”. However, by relying on old maritime surveys and charts, it found that the Fiery Cross Reef was in its natural condition a rock, which nonetheless remained its legal status.[11]

One may argue that the logic applied by the Court amounted to a legal fiction that favored an untruth in favor of the truth.[12] This is because the original factual condition of the features is not a real factual basis from which other legal rules could “reasonably apply”.[13] In this sense, Lewis points out that the fiction created by the court, although it was based on good reasons, has alleged negative consequences, for instance, the infeasibility of using the original baselines of the feature for determining rights and obligations emanating from it, when it can no longer be identified after the artificial transformation.

Moreover, China holds the position that the award was void and without any legal effect.nding China’s position, the award’s ruling is a binding decision under international law that has legal effects under the region’s marine regime.

Since 2016, it seems that China nonetheless has partially complied with the decision, although it has not abandoned its artificial islands, nor has it renounced its claims to territory within the Nine-Dash Line.[16] However, recently, in April, the Government of the Philippines spotted the presence of a new structure which would allegedly be an eighth Chinese artificial island on the Philippines’ EEZ.[17] Suppose China indeed insists on maintaining its artificial islands building activities Philippines’ EEZ. In that case the international community would certainly have a problem in the international law of the sea realm, as the rest of the world, including the United States[18], have firmly supported the PCA’s ruling in consonance with UNCLOS, thus condemning China’s activities, which are employed based on their historical claims.

In conclusion, the new Chinese strategies in the South China Sea demonstrate that perhaps the Chinese government is still focused on expanding its artificial islands program. However, as discussed above, the artificial modification of a low tide elevation into an island is not relevant under the interpretation given by the PCA over the UNCLOS regime since the features are to be interpreted in their original form. In this sense, regardless of the discussion in relation to the legality of China’s initiatives, it seems that under international law, they might end up not having the expected effect of expanding Chinese sovereignty in the region through further marine entitlements arising from these artificial islands, as regardless of how modified they are, their legal status would remain the same.

[6] For the transformation of the features, see Asia Maritime Transparency Initiative [AMTI], “Occupation and

[18] The United States, however, have not ratified the Convention. The U.S. senate has not yet reached the two-thirds majority needed for such a ratification, notwithstanding requests made by Presidents Clinton, Bush and Obama in favor of the approval. Most of those arguing against the ratification continue to criticize terms of the deep seabed mining regime based on a singular preoccupation with President Reagan rejecting the treaty 22 years ago. This renders their position quite contradictory in the South China Sea matter. See: MIRASOLA, Christopher. Why the US should Ratify UNCLOS: A view from the South and East China Seas. Harvard Law School National Security Journal. Available at: https://harvardnsj.org/2015/03/why-the-us-should-ratify-unclos-a-view-from-the-south-and-east-china-seas/.