Turkey and Greece are historic rivals in the Aegean Sea region, having twice, in 1987 and 1996, almost started military hostilities due to sovereignty disputes in the region. The geographical features of the region maybe are the main reasons for the constant friction, as the vast number of Greek islands spread all over the sea provokes consequences of all kinds, including in the Law of the Sea realm. 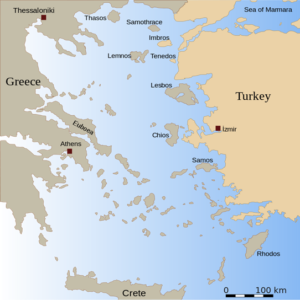 As it can be seen in Image 1, Greece has sovereignty over the majority of islands in the Aegean, including a few extremely near the Turkish continental territory, as the island of Samos. Under the United Nations Convention for the Law of the Sea (UNCLOS), the regime of islands regarding the territorial sea, the contiguous zone, the EEZ, and the continental shelf, except when they are rocks that cannot sustain human habitation or economic life of their own, are determined in accordance with the provisions applicable to other land territories.[1] This would entail that, on the Aegean sea, all Greek islands with human habitation or economic life of their own would have their continental shelf and EEZ, rendering a considerable portion of the region to fall under Greek dominance.

Unsurprisingly, in this sense, Turkey does not manifestly accept the regime established by the UNCLOS and it is not a party to the Convention. Instead, Turkey holds that islands cannot have a full EEZ and that its own EEZ is coextensive with its continental shelf, based on the relative lengths of adjacent coastlines – a  political as well as a legal position that completely disadvantages those islands and it is a unique interpretation under International Law.[2] Moreover, Turkey defends what is labeled as Turkey’s Blue Homeland: 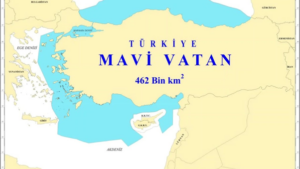 This Turkish interpretation of the marine limits in the Law of the Sea draws a median line in the Aegean Sea and completely disregards the existence of Greece’s maritime entitlements around its islands. The Greek Foreign Minister Nikos Dendias stated that the Blue Homeland theory has a “communication campaign character that cannot change international legitimacy, merely establishing Turkey’s image as a perpetrator”[3].

On 28 November 2019, President Erdoğan signed a Memorandum of Understanding (MoU) in Istanbul with the Prime Minister of the Tripoli-based Government of National Accord of Libya (GNA), Fayez al-Sarraj, to demarcate maritime zones in the Eastern Mediterranean on an area between Turkey and Libya.[4] The MoU was negatively received by other european states, which in its majority deemed the deal as illegal under international law.[5] Furthermore, it was ventilated that Turkey was exploiting Libya’s fragile situation to gain control over the Mediterranean in contrast to international efforts to resolve the Libyan Civil War and curb the migrant influx to Europe.[6] 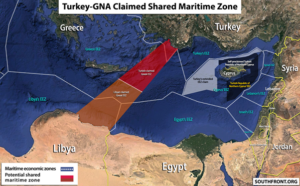 In response to the Lybian-Turkey agreement, Greece started making bilateral deals of their own, which were in light of the UNCLOS rules, and welcomed by some members of the international community.[7] In the agreement made with Italy, for instance, part of the EEZ of the small Greek islands of Strofades, Othoni, and Mathraki was traded off for an equal area elsewhere. According to Dendias, this creates a great precedent for future Greek-Turkish negotiations.[8] Moreover, it is noticeable that overall, the bilateral deals constructed by Greece are creating positive precedents for a possible negotiation with Turkey, considering their coherence with International Law.

The fact is that, currently, despite detailing its position regarding claims and sea boundaries in various letters to the UN, Turkey has yet to answer whether it accepts the very existence of Greek and Cypriot continental shelf entitlements in the Eastern Mediterranean Sea and whether it is at all prepared to give effect to Greek and Cypriot entitlements in boundary delimitation.[11] As the International Court of Justice has already stated in the North Sea Continental Shelf case, only where maritime entitlements overlap does the question of boundary delimitation arise.[12] Consequently, where one state rejects the existence of maritime entitlements of another state, there is little room for a negotiated compromise on maritime boundaries.

According to Papadakis, Greece indicates that all the Aegean issues are legal matters that can best be arbitrated in international courts, while Turkey understands that they are political matters that should not be brought before the ICJ.[13] Bearing in mind the Court’s jurisprudence, most of all, in light of the Ukraine-Romania case, it seems that Turkey would only win a small percent of the disputed area.[14] Nonetheless, throughout the last years, Turkey is being quite active in the disputed zone having sent exploration vessels close to the new maritime border with Libya[15], expanded its “Search and Rescue responsibility” area in the Aegean Sea[16], among other actions.

In response, Greece and allies have sent vessels to patrol and safeguard the region and, on 18 November 2020, Greece signed a defense pact with the United Arab Emirates aimed at mutual protection against Turkey.[17]

In this scenario full of tensions, it seems that an International Court of Justice decision could solve the legal issue without having a lot of problems. Nonetheless, the fact that a possible ICJ ruling in light of the applicable law would leave Turkey with only a small portion of the Aegean Sea under its control, combined with Turkey’s non-ratification of UNCLOS and its dissenting opinion regarding the applicable regime to the Greek’s islands, shows that a decision in this dispute might be far from happening. Furthermore, direct talks between the two States about maritime boundary disputes have been blocked for five years[18], rendering the situation into a true political deadlock.

[1] UNITED NATIONS. United Nations Convention for the Law of the Sea, 10 Dez. 1982, art. 121. Available at: https://www.un.org/depts/los/convention_agreements/texts/unclos/unclos_e.pdf.

[7] See, for instance: IEFIMERIDA. Support from Arabia: Praises Greece-Egypt agreement on EEZ. In: IEFIMERIDA. Iefimerida. Greece, 14 Oct. 2020. Available at: https://www.iefimerida.gr/politiki/saoydiki-arabia-exire-symfonia-elladas-aigyptoy-aoz ; PROTOTHEMA. The State Department for the Greece-Egypt agreement: In favor of the peaceful settlement of disputes. In: PROTOTHEMA. Protothema. Greece, 07 Aug. 2020. Available at: https://www.protothema.gr/politics/article/1033028/to-state-department-gia-ti-sumfonia-elladas-aiguptou-uper-tis-eirinikis-epilusis-ton-diaforon/.

[8] HUFFPOST. Dendias: We tell the Turks to be extremely careful. In: HUFFINGTON POST. Huffpost. Greece, 19 Jun. 2020. Available at: https://www.huffingtonpost.gr/entry/dendias-leme-stoes-toerkoes-na-einai-exairetika-prosektikoi_gr_5eec4edec5b6f2720db370e7?utm_hp_ref=gr-homepage.