There has recently been an interesting post-Brexit chapter involving fisheries and the law of the sea on Jersey Island. On May 6, more than 50 French boats staged a protest at the port of Saint-Hélier, in Jersey, due to the new requirements and limitations on access to fish stocks in the region imposed by the British after their departure from the European bloc.

To understand the controversy, it is necessary to explain the unique geopolitical and legal situation of the Isle of Jersey, which is physically close to France but still maintains strong ties with the United Kingdom. Located about 20 kilometers off the coast of France and 140 kilometers off the British coast, this territory has autonomy of government, although it is still a dependency of the British Crown. Furthermore, even though it is not considered part of the United Kingdom, the exercise of certain prerogatives pertaining to sovereign power, such as external defense and the fulfillment of international obligations, are still exercised by London. 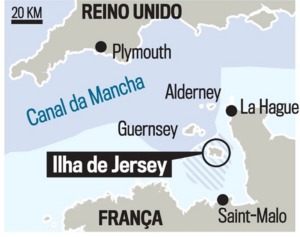 In the agreement establishing trade relations between the United Kingdom and the European Union after Brexit, approved on December 24, 2020, [1] the right of Europeans to access fish stocks located in zones between 6 to 12 nautical miles was maintained from the British coast, as long as they already carried out the activity in the area on a regular basis. In addition, a transition period was also established in the sector until the summer of 2026, in which fishermen will have to gradually give up 25% of their catches in British waters. According to the agreement, there will be annual renegotiations between them.

Since the end of April 2021, the British have instituted a license as a requirement for access to fish stocks in the waters under the jurisdiction of the Isle of Jersey, which the French have opposed, alleging that some requirements to acquire such a document go beyond what was foreseen. in the December 2020 agreement, making it impossible to comply. For example, the limitation of dredgers of up to 12 lines would not be part of the original agreement [3] , nor the prohibition of fishing for dorados in certain areas, when studies are being carried out for the preservation of the species [4] . However, the biggest impediment to the French has been proving that they were already fishing in this area in the period between 2012 and 2016 [2], as many ships did not have a GPS or other official records. As a result, the United Kingdom issued only 41 licenses for access to fishing sites in the English Channel, much less than the 344 requests made by the French.

In response to this situation, a French minister has threatened to cut 95% of the island’s electricity, which comes from French territory via three large undersea cables, sparking a diplomatic conflict between London and Paris. In an escalation of diplomatic tensions between the countries, the British government sent two patrol ships of its navy (Severn and Tamar), in order to watch and ensure that French fishermen do not block the entrance to the port. Paris also sent two ships [5] .

The European Union urged France and the United Kingdom to calm down in an attempt to end this “naval battle”. However, the European Union understood that the rules were discriminatory, given that there is no justification for the new rules imposed by the United Kingdom and Franca was not given the opportunity to analyze the new requirements and contest them. After numerous negotiations, the French boats agreed to leave Jersey harbor on May 6, even though local Jersey authorities have maintained their positions on the new measures. At least for the time being the conflict is over. However, this situation is far from being resolved, given that the economic and political relations between the members of the European Union and the United Kingdom in the post-Brexit era,

In fact, fishing has always been one of the delicate issues in the negotiation of the post-Brexit trade agreement – ​​not to mention one of the great motivators for the separation between the United Kingdom and the European Union. This time around, it is possible that this is just one of many diplomatic and legal controversies in the post-Brexit world. Let’s wait for the future.

By Rayanne Reis Rêgo Cutrim , intern at the Brazilian Institute for the Law of the Sea (IBDMAR), under the supervision of Doctoral Student Luciana Coelho.

Conflict between France and UK over fishing rights after Bretix heats up. Newspaper O Globo . 2021. Available at:< https://oglobo.globo.com/mundo/conflito-entre-franca-reino-unido-por-direitos-de-pesca-depois-do-brexit-esquenta-1-25005819>. Accessed on: May 17, 2021.

Disagreements over fisheries heighten tension between France and the UK. ANSA. UOL . 2021. Available at:< https://www.bol.uol.com.br/noticias/2021/05/06/divergencias-sobre-pesca-elevam-tensao-entre-franca-er-unido.htm>. Accessed on: 15 May 2021.