Uruguay’s national director of marine resources, Jaime Coronel, told the China Dialogue Ocean website that the governments of Uruguay and Brazil have been discussing, since last year, the creation of a regional fisheries management organization (RFMO) for the South Atlantic, which would also involve the other Mercosur countries (Argentina and Paraguay). The current Uruguayan government is at the head of the initiative, which is in conformity with the announcement made last year to create several marine protected areas that would cover 10% of its national waters.

RFMO’s facilitates cooperation between different governments and allocates specific resources for monitoring vessels and measures for the conservation of the marine environment and fishery resources. Many RFMO’s can limit fishing catches and have compliance mechanisms to ensure that their member states follow their recommendations, which are binding. In addition, these organizations conduct marine research, collecting and sharing the data necessary for the creation a good action plan for conservation of living resources. Thus, RFMO’s can prevent overexploitation of marine stocks in their area of jurisdiction, as well as to prevent illegal, unregulated, and unreported fishing.

The mandate of some of these organizations refers to a specific species, such as the International Whaling Commission, established in 1946 for the conservation of whale stocks across the globe. Others have competence related to a specific geographic area, such as the Northwest Atlantic Fisheries Organization and the Northwest Atlantic Fisheries Commission, both in the North Atlantic.

In almost all ocean regions around the globe, an organization with a geographic competence and another with species-specific competence coexist within the same space. However, in the South Atlantic, only the mandate of the International Commission for the Conservation of Atlantic Tunas is observed, and there is no RFMO for the conservation of other species, such as those existing in the South Pacific and North Atlantic. Therefore, there is an institutional gap in the region that is damaging both to the region’s fish stocks and to the ecosystems that are impacted. 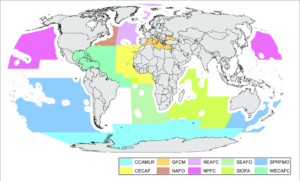 There are several tradable marine stocks in the South Atlantic. Many of them are considered straddling fish or highly migratory species, as they transit between the exclusive economic zones of different countries and between international waters and the different exclusive economic zones of the region. Article 63 of the United Nations Convention on the Law of the Sea (UNCLOS) stipulates the obligation of states parties to seek collaborative conservation measures for this type of species, as well as the UN 1995 Agreement, which establishes, in its article 8, the need for cooperation by states through regional fisheries organizations. As a result, the management and conservation of highly migratory species must be carried out with collaborative mechanisms, which could be improved with the creation of a specific RFMO for the region. In addition, the pollution generated by fishing vessels is also transported to exclusive economic zones due to the mobility of the water column, which, as is well known, not static. This practice ends up affecting the entire ecosystem of the region.

Furthermore, the creation of a RFMO for the South Atlantic could mitigate a growing problem in the region. In recent months, several vessels from countries such as China, Taiwan, South Korea, and Spain have been fishing in waters adjacent to the spaces under which the countries of the South Atlantic exercise sovereign rights. The situation is worst on the edge of Argentina’s exclusive economic zone, where several Chinese vessels have recently been reported focusing on squid fishing. In the year 2020 alone, the country seized three Chinese vessels conducting illegal fishing in its exclusive economic zone.

Also according to Coronel, Argentina indicated at the last FAO meeting that it does not intend to negotiate an RFMO for the South Atlantic, but is willing to discuss a different management mechanism. On March 2 of this year, the Argentinian government announced the creation of the Joint Maritime Command, which aims to monitor and control the country’s territorial waters, in addition to combating the pollution of foreign ships that are concentrated in the waters adjacent to its EEZ. The creation of the Command seems crucial for Argentina at this moment, as the country faces a large concentration of Chinese ships on its coast.

Thus, the creation of an RFMO for the South Atlantic is extremely important to fill this gap in fisheries management. However, although the debates around its creation are advancing, it is not possible to envision in operation soon, at least not with the participation of all the countries of South America, since Argentina has already shown it is not willing to negotiate right now. If an RFMO for the South Atlantic is created without the presence of all coastal countries in the region, this weakened origin can be detrimental to the organization’s fulfillment of all its objectives.