On February 14, 2021, an unprecedented international cooperation in Brazilian jurisdictional waters culminated in the interception and seizure of the catamaran sailboat Guruçá Cat by the Ocean Patrol Ship (NPaOC) “Araguari”. The operation involved the participation of the Brazilian Navy, the Federal Police, the Maritime Operations and Analysis Center – Narcotic (MAOC-N/Portugal), the Drug Enforcement Administration (DEA/USA) and the National Crime Agency (NCA/United Kingdom).

Built in the United Kingdom, the NPaOC “Araguari” was incorporated into the Brazilian Navy in 2003. It is one of the vessels that patrol the northeastern coast. Composed of 83 soldiers, the NPaOC “Araguari” patrols a maritime area that includes Ceará, Rio Grande do Norte, Paraíba, Pernambuco and Alagoas.

The seized sailboat was loaded with 70 packages containing 2,216 tons of cocaine, which is expected to be incinerated at the end of the investigations. The vessel had left Brazil heading for Europe and it was intercepted in the Brazilian Economic Exclusive Zone (EEZ), about 270 Km from Recife, Pernambuco. 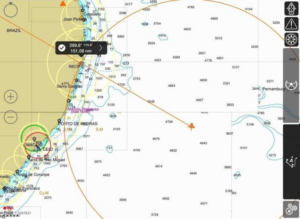 SOURCE: Ministry of Defense/ With informations from the Brazilian Navy and the Federal Police Department

There is a central body of the Federal Police, the Prompt Intervention Group (GPI), responsible for implementing international cooperation against drug trafficking. The special group received informations from the international agency of multilateral cooperation information, based in Lisbon, Portugal, according to which a vessel, in Brazilian jurisdiction waters, would be waiting to transport a large amount of narcotics to Europe. The vessel was already being monitored since February 13, where it was located in the Brazilian territorial sea, however, its interception on the 14th occured in the Brazilian EEZ.

The Drug Enforcement Police Station requested support from the Brazilian Navy, which provided a ship anchored in Natal, Rio Grande do Norte. The operation relied on the use of an Ocean Patrol Ship (NPaOc) by the Brazilian Navy and with the support of federal police’s Prompt Intervention Group (GPI).

The catamaran sailboat was escorted to Recife by the Patrol Ship with the help of federal police officers from the GPI. The vessel docked at the port of the capital of Pernambuco on February 16 at 7:05 am. After removing the drugs, the sailboat was sent to the Cabanga Iate Club, located near the Port of Recife.

The five crew members, all of Brazilian nationality, and the drugs found on the vessel were taken to the Federal Police Superintendence, at the “Cais do Apolo”, in the capital of Pernambuco. The five detainees are being indicted for the crime of international drug trafficking (article 33, caput, Law 11.343/2006) with a prison sentence of between 5 and 15 years, and payment of fine days. After the hearing, the prisoners will be sent to a custody hearing in the Federal Court in Pernambuco (JFPE) to decide whether they will respond to the process in freedom.

This fact is related to international organized crime, which according to the UN Security Council, it is a threat to international peace and security. For this reason, maritime crimes fall within the scope of Law Enforcement, as a strategy to combat maritime crimes, which requires a conception of maritime security, distinct from the concepts of naval defense.

The operation that resulted in the seizure of the sailboat can be characterized as a Law Enforcement operation, since it involved the Brazilian Navy and the federal police’s Prompt Intervention Group to combat international drug trafficking.

The use of force at sea refers to the sovereign rights exercised by the coastal State in maritime territory and in the national jurisdiction space. In this logic, it is understood that the Brazilian Navy and the Federal Police could carry out this Law Enforcement operation in the EEZ based on the provisions of UNCLOS, in particular, articles 58.2 and 94.1.

In fact, Brazil, as the flag-flying State of the vessel, has the obligation to exercise its jurisdiction and control of these ships both in the EEZ and on the high seas in relation to administrative, technical and social issues. In addition, the substantial link, provided for in article 91 of the UNCLOS, between the vessel and the flag State also guarantees Brazil control and inspection on the vessel.

It is also worth mentioning the Convention Against Illicit Traffic in Narcotic Drugs and Psychotropic Substances, adopted in 1988 and ratified by Brazil in 1991, which provides in articles 4 and 17 on the possibility for the State to adopt the necessary judicial measures against crimes such as international drug trafficking drugs, committed aboard vessels flying their flag.

Regarding the legal limits of the exercise of police power at sea, the International Tribunal for the Law of the Sea (ITLOS) has already recognized some customary limits related to the proportional use of force, when examining cases involving illegal fishing, highlighting the case of M/V Saiga (Saint Vincent and the Grenadines vs. Guinea).

First, the police authority must progressively follow the steps of using force, in order not to violate the principle of proportionality. During the Brazilian police operation in the face of the catamaran sailboat, it was precisely the progressive use of force. From the information obtained internationally, the vessel was first intercepted for investigations. Finally, the vessel was apprehended and the crew was detained.

Regarding to the Brazil’s international cooperation with other States and international organizations, due to the fight against drug trafficking, in addition to the forecast of article 108 of UNCLOS, the article 65 of Law 11.343/2006 provides for this possibility, consisting of the request for collaboration, exchange of police information and judicial measures.

Based on this legal framework, Brazil maintained, through the Federal Police, the exchange of information on drug trafficking with the MAOC-N in Portugal, the Drug Enforcement Administration in the USA and the National Crime Agency in the United Kingdom, that made it possible to carry out the operation against the catamaran sailboat.

Finally, it is noteworthy that international cooperation is important for the management system of the Blue Amazon, which protects and monitors 5.7 million km² of Brazil’s maritime strip. The success of the operation reinforces the importance of cooperation between national and international agencies, as well as the exchange of information with international institutions for the identification of criminal organizations.