Around the world, 135 crew members were hijacked from their ships in 2020. Out of this total, 95% of the hijackings took place in the Gulf of Guinea¹. Apparently, this indicator will remain high this year, according to the IMB Piracy Reporting Center – special division of the International Chamber of Commerce – West Africa continues to report a high number of incidents². Two cases that occurred in the first quarter are especially representative of the current situation. 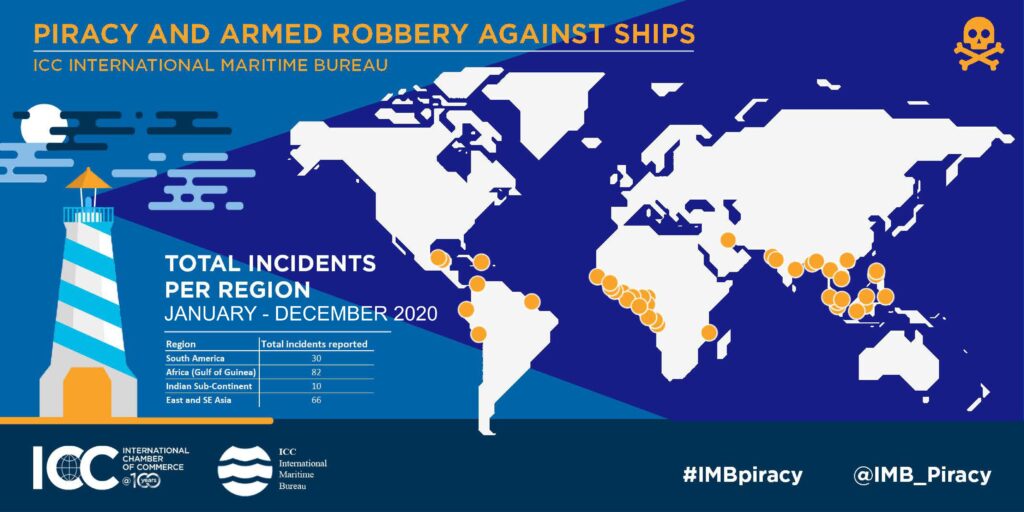 On his way, on January 23, the Liberian-flagged Mozart freighter, mostly Turkish crewed and managed by Borealis Maritime, a company based in London and Hamburg³, was approached by an unknown number of pirates while it was around 100 nautical miles from the coast of São Tomé, during the trip from Lagos to Cape Town. One crew member, this one of Azerbaijani nationality, was killed, while another fifteen, all Turkish nationals, were kidnapped. Three other crew members were left on board and were later able to sail to a safe harbor in Gabon’s waters⁴. 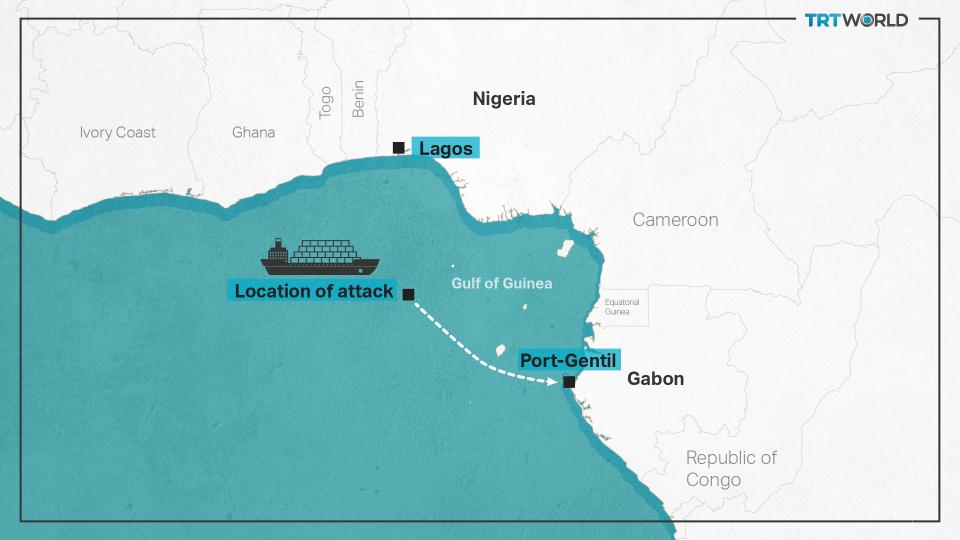 The hijacking had repercussions in Turkey, and President Recep Tayyip Erdoğan even spoke on the phone twice with the ship’s fourth captain, Furkan Yaren, who remained on board after the attack and said he sailed blindly towards Gabon, with damage to the ship’s controls and only the radar working. Furkan, according to state news agency Anadolu, also said that the pirates beat the crew and left him with an injured leg, while another still on board the ship had splinter injuries⁵⁶⁷. David Johnson, CEO of the UK-based EOS Risk Group, said that “the fact that someone died, the number of people arrested and the apparent use of explosives to violate the ship’s citadel means that it is a potential turnaround.”⁸ Istanbul-based Boden, which provides technical management services for the ship, was contacted by the pirates on January 28, and two weeks later the fifteen Turkish seafarers were released. Speaking to state TV broadcaster TRT Haber, Levent Karsan, director general of Boden, said he hoped the incident would prompt United Nations and International Maritime Organization officials to take action against piracy in the region⁹. Turkish Foreign Minister Mevlüt Çavuşoğlu, also for TRT Harber, said that “we must learn from this and work together to ensure that it does not happen again”¹⁰.

About a month later, on March 11, Davide B, a Maltese-flag tanker with 21 crew members on board, including Ukrainian, Romanian and Filipino citizens, was approached by nine armed pirates about 212 nautical miles south from Cotonou, Benin¹¹. The alarm was triggered, distress messages were sent, and a Nigerian security ship was sent for assistance. However, when the security ship arrived, fifteen crew members had been hijacked. The remaining six of the crew, together with Davide B, were safely escorted to a safe haven¹². A few days later, De Poli Shipmanagement, the Dutch company that operates the ship, was contacted by the pirates and negotiations began for the release of the sailors¹³. Just over a month after the kidnapping, all fifteen crew members were released and returned to their homes¹⁴¹⁵. 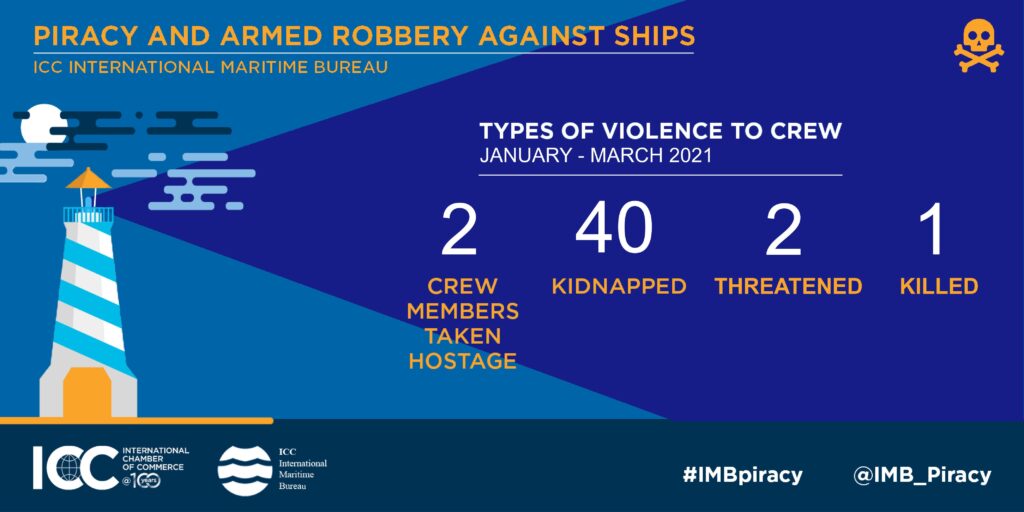 A report by the IMB Piracy Reporting Center pointed out that the Gulf of Guinea was responsible for all forty crew members hijacked in the world, and the only fatality so far¹⁶. The concern generated by these incidents echoed in the International Maritime Organization, with its Secretary-General, Kitack Lim, having pointed out in a circular letter the measures that the IMO has taken to coordinate initiatives among interested parties, including meetings with industry representatives, the Nigeria Maritime Administration and Safety Agency and the Interregional Coordination Center. At the next session of the Maritime Safety Committee, MSC 103, scheduled to take place in May 2021, the IMO intends to convene a maritime safety working group with a focus on the Gulf of Guinea¹⁷.

Concern of the same order was expressed by Aslak Ross, head of maritime standards at the Danish giant Maersk, which is responsible for at least a third of maritime trade in the Gulf¹⁸. Ross said “it is unacceptable these days that seafarers cannot do their job of securing a vital supply chain for this region without having to worry about the risk of piracy”¹⁹, and Agence France-Presse reported that Maersk wants an international mission similar to the naval operation that the European Union has been deploying in the Gulf of Aden, off East Africa, since 2008 and which is credited with a sharp drop in piracy there. Coincidence or not, shortly afterwards the Kingdom of Denmark, which supports Maersk’s attempts to involve the European Union in the security of the region, announced that by the end of the year it will send a frigate to fight pirates and support and escort civil navigation in the area, operating in international waters²⁰.

For its part, the European Union approved, on January 25, 2021²¹, the launch of the first pilot project of the Coordinated Maritime Presence (CMP) initiative for the Gulf, which makes the region a Maritime Area of ​​Interest under the coordination of the European Union Military Staff²². The EU-led CMP involves France, Spain, Italy and Portugal, and provides resources for military ships that are already in the region, in exchange for sharing information and intelligence. However, according to Jessica Larsen of the Danish Institute for International Studies²³, as there is no mandate for CMP ships to intervene in an attack, the EU initiative falls short of the intervention expected by Maersk and Denmark. In an interview with Agence France-Presse, Munro Anderson, from maritime security company Dryad Global, adds that “it is unlikely that Nigeria will receive an international naval coalition, as this would serve to highlight the ineffectiveness of Nigerian efforts to combat piracy”²⁴.

News produced by Raphael Pereira da Silva, intern at BILOS, under the supervision of Prof. Dr. Luciano Vaz Ferreira, Professor at the Federal University of Rio Grande, Director of BILOS.

²⁰ DANISH MINISTRY OF DEFENCE. Denmark deploys a vessel contribution in order to fight the pirates in the Gulf of Guinea. Disponível em: https://fmn.dk/en/news/2021/denmark-deploys-a-vessel-contribution-in-order-to-fight-the-pirates-in-the-gulf-of-guinea/.