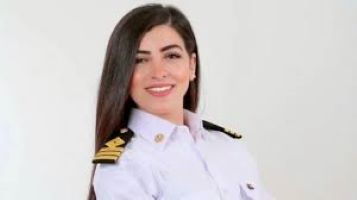 Located in Egypt, the Suez Canal is an important artificial sea-level waterway that connects the Mediterranean Sea to the Red Sea. Over the last few days, the Canal, which has a daily flow of about 50 vessels, representing 12% of world trade, was highlighted in the media due to its blockage by the ship Ever Given, a 400 meter long container ship of approximately 220 thousand tons that grounded there.

Due to this situation, the traffic between the Red Sea and the Mediterranean was paralyzed between March 23rd and 26th and a total of 422 ships, with 26 million tons of products, were blocked. Among the possible reasons for the incident, the following ones can be pointed out:  the strong winds, technical problems and the Bank Effect, the effect of hydrodynamic interactions between the ship and a sandbar that can cause the loss of control of the vessel.

But what Marwa Elselehdar did not expect, was that she, the first woman in Egypt to reach the rank of ship captain and that was working in the command of the ship Aida IV, kilometers from the Suez Canal on the day of the accident, would be falsely accused of being the responsible for the blockade. Apparently, it started with a false headline that was wrongly attributed to Arab News website, which claimed that Ms. Elselehdar was involved in the incident.

Those who were responsible for spreading the rumor used a photo of the captain published on March 22nd in a real news story on the Arab News website, which praised the successful career of the professional who, among other achievements, was the youngest and the first Egyptian female captain to cross the Suez Canal, in 2015. In the modified image, which was shared several times on social medias such as Twitter and Facebook, Elselehdar’s face and name were linked to the Ever Given’s accident. Furthermore, Twitter accounts with the captain’s name spread false claims that she was involved in the blockade. According to the young woman, the altered photos and false information are part of a defamation campaign against Arab women.

Marwa Elselehdar, who has been working with navigation for 10 years and in 2017 was honored by the Egypt President, Abdel Fattah El-Sisi, during the Women’s Day celebrations, was afraid that all her efforts would be harmed by the fake news that reached several countries. In an interview, she says “This fake article was in English so it spread in other countries. I tried so hard to deny what was in the article because it was affecting my reputation and all the efforts I exerted to be where I am now”.

In response, Arab News issued a story about the fake publications related to its article and Ms. Elselehdar. On her social networks, she posted a video explaining the incident and thanked the website for the report that highlighted her achievements as a sailor and her work on Aida IV, a vessel owned by Egypt’s maritime safety authority that transports supplies to a lighthouse in the Red Sea and is also used for training at the Arab Academy of Science, Technology and Maritime Transport (AASTMT).

The attacks suffered by Marwa Elselehdar on the internet were not the first case of prejudice faced by the captain in a male-dominated environment, where women represent only 2% of the 1.2 million sailors, according to the International Maritime Organization (IMO). About the subject, she said that “People in our society still don’t accept the idea of women working in the sea away from their families for a long time. But when you do what you love, it is not necessary for you to seek the approval of everyone.”

Despite the uncomfortable situation, Ms. Elselehdar, who will take the final exam in May to reach the full captain’s post, said she focused on all the positive comments. “I decided to focus on all the support and love I’m getting, and my anger turned to gratefulness”, she added. At the end, the young woman left an encouragement for all women “My message to women who want to be in the maritime field is to fight for what you love and not let negativity affect you”.