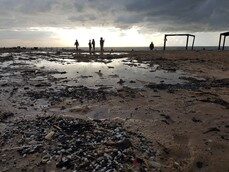 By Milena Barbosa de Melo, Ph.D., Master and Specialist in International Law by the University of Coimbra – Portugal, professor at the State University of Paraíba, foreign trade analyst, consultant, and researcher.

In the last month of February, more specifically on the 21st, Israel was plagued by one of the biggest environmental disasters in the region, where 170km of its coastal zone, which makes up 40% of Israeli seas, were struck by an oil spill.

The consequences are very complicated, as nature has been severely affected, since environmental, marine and terrestrial species ended up being contaminated, damaging all animal life in the area.[1] Israeli environmental authorities have stressed that the total clean-up of the area could take years, due to the magnitude of the disaster.[2]

After two weeks of investigation, without presenting evidence, the Israeli authorities began to accuse Iran of environmental terrorism, claiming that the vessel was from the Iranian country and that its destination was Syria and that, during the transfer, it turned off the automatic identification system.

Minister Gamliel said categorically that this measure is one of the ways Iran has found to obtain nuclear weapons. In addition, the minister also assured that she will, in the name of all Israelis, settle the accounts with the person in charge.[3]

As a result of this process, the country has approved a large financial amount to assist in the process of cleaning the affected region and, in addition to official bodies, several countries and civil society itself have made efforts to assist in cleaning up the region.[4]

With regard to the investigation process about the responsibility for the act, Israel is far from solving the problem, because although the investigations indicate about eight ships (possibly responsible), they are limited only to accusing the vessel from Iran, a situation that it ends up harming the already difficult relations between both nations.[5]

In addition, the country did not carry out the specific decisions of the Barcelona Convention, which establishes the need to inform the other signatory members about the imminence of an environmental disaster, given that the Israeli authorities should have warned about the imminent danger, but they did not. [6] On the other hand, in the internal sector, the Haifa Court starts prohibiting the disclosure of any information about the suspects, damage, and responsibility.[7]

In this case, we can see a violation of fundamental rights and guarantees related to freedom of speech and the right to be informed. Banning the non-disclosure of information, which could help society, seems to have an incalculable impact since the instrument of information is central to maintaining a society. Therefore, without information, the population cannot organize itself adequately to exercise their citizenship through contributions of participatory measures in society.

The measures applied by Israel are far from being a democratic conception, even with national security being used as justification, equating the problem to the one with Hezbollah. In this way, the consequence of all the measures taken by the Israeli government is that of more conflict[8].

Regardless of the justification given by Israel, it is not reasonable that in this case, its population has their Right specified in article 19 of the Universal Declaration of Human Rights (UDHR) violated, because after all, to have effective participation in social acts, the measure should be inclusive.

Even though Israel is not a member of the United Nations Convention on the Law of the Sea, the principles of law adopted in the Convention represent the concern of any sovereignty, namely, territorial protection.

Based on this assumption, one cannot wish to direct the investigations to the personal field but to think broadly, that is, including aspects of environmental protection in the maritime environment.

Much is being discussed but little is being done, and that is the result of a system that cares more about what it can usurp from society than the place it inhabits. Thus, knowing that the inertia of the Israeli legal order is evident, it is up to international society to apply responsibility measures about the lack of commitment with international rules of environmental protection and also, of fundamental human rights inherent to the human condition.